In Russia’s pageantry of state visits to Iran, its counter to the West is quite evident. 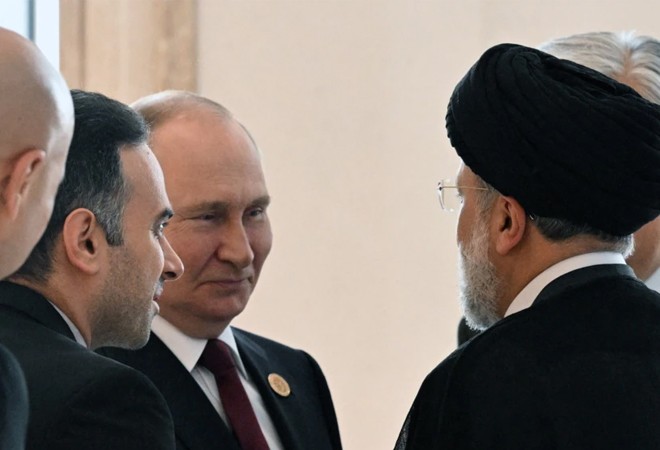 Although Russia and Iran have shared an adversarial relationship with the United States US) for a while, the two countries were careful not to get too close earlier. However, in the wake of attempts at international isolation and burgeoning sanctions, Putin’s visit could be viewed as an endeavour to counter western efforts to punish and ostracise Moscow. Importantly, Iran expressed support for the war in Ukraine with the Supreme Leader’s vocal endorsement of the same in clear terms. Khamenei expressed Iran’s dissatisfaction at the plight of the people caught in the war but added that in the case of Ukraine, had Russia not mobilised, the West would have done so and initiated a conflict regardless.

Türkiye and Iran find themselves on opposite ends in Syria and Libya, competing for influence in the South Caucasus while Turkish combat drones have not only been aiding the Ukrainian military in the ongoing war but have become icons in themselves, being at the forefront of Ukrainian countermeasures.

This engagement with Iran and Türkiye stemmed out of necessity as Russia has shared a difficult relationship with both Tehran and Ankara. Türkiye and Iran find themselves on opposite ends in Syria and Libya, competing for influence in the South Caucasus while  Turkish combat drones have not only been aiding the Ukrainian military in the ongoing war but have become icons in themselves, being at the forefront of Ukrainian countermeasures. Iran and Russia are also competitors in the global energy market. Putin had intentionally also stayed away from building a full-fledged alliance in the past in pursuit of bolstering relations with Arab countries and Israel. Both Iran and Russia have looked towards Asian markets to mitigate losses from energy commodity sales in the West. However, even in Asia, Tehran and Moscow are in a battle with each other to grab market share.

As its relations with the West kept souring, Russia had started to court Iran even before the invasion of Ukraine. This year, it was the third time that Putin and Iran’s President Ebrahim Raisi met. These interactions would suggest that due tothe sanctions imposed by the West, Russia is increasingly starting to look at Iran as an economic partner, with the two countries also having to tackle sanctions to keep their economies afloat, something that Iran has been doing for a prolonged duration now. This strategy of partnering with Iran against a fast-developing great power competition played out earlier as well when China signed a massive multi-billion-dollar strategic agreement with Tehran in 2021. However, as an anti-US agreement, Iran played this up much more than China did, highlighting the utility of such an agreement, which is yet to show a massive infusion of investments from China into Iran but did cause enough noise in the international arena to bolster Beijing’s persona.

Russia could also be looking to buy combat drones from Iran, which could be essential to continue the war in Ukraine, owever, this was not discussed in these interactions.

Meanwhile, reports suggest that Russian energy giant Gazprom has signed a non-binding deal worth US$ 40 billion to help develop oil and gas fields in Iran. Russia could also be looking to buy combat drones from Iran, which could be essential to continue the war in Ukraine, owever, this was not discussed in these interactions. At the meet in Tehran, Putin said that the relations between the two countries were developing at a good pace in “economic, security, and regional affairs” and that Raisi had agreed to enhance cooperation in energy, industry, and transportation. Russia and Iran also agreed on the need to eliminate the US dollar gradually from global trade.

However, all of these plans are easier said than done. For Moscow, investing in a heavily-sanctioned Iran comes with a strict set of challenges. For countries like India, which is benefitting from a plummeted per barrel price of Russian crude in the market and maintaining a balance between its relations with Moscow and the West, any further tightening of sanctions against Russian energy industries will also make it difficult to conduct business. If Russia sees the Iranian model of a survivalist state navigating the harshest sanctions ever against any country as something to benefit from, Moscow will also have to consider that trade with Tehran, even with friendly countries, had become unviable. And any future plans of breaking the monopoly of the US dollar beyond a point will put much of the global South, a construct that actively remained non-aligned over Ukraine, make choices that ultimately may not favour either Moscow or Tehran.

Türkiye ’s participation in such dialogues is going to become difficult going forward as the NATO member looks to balance diplomacy in a region where there is a significant gap between its own neighbourhood policies and NATO’s larger aims.

It would appear that Iran’s leaders are keen on strengthening relations with Russia in the backdrop of a rising Gulf Arab-Israeli block backed by the US, which could disturb the balance of power in the Middle East, taking it further away from Iran. Iran would also benefit from Russia’s support in pressurising Türkiye in Syria, where the latter has backed the anti-Assad insurgents. Erdogan’s visit to Iran during Putin’s visit went largely under the radar, as some analysts believe. It was Syria that remained the crux of the issue, and not Ukraine. It was mothballed by Russia and Iran, viewing Ankara’s role in northern Syria from the window of the Ukrainian conflict. Türkiye ’s participation in such dialogues is going to become difficult going forward as the NATO member looks to balance diplomacy in a region where there is a significant gap between its own neighbourhood policies and NATO’s larger aims. This was in view recently beyond Iran and Russia as well, as Ankara held up Finland and Sweden’s ascension into NATO to leverage guarantees over Kurdish groups and their ecosystems in mainland Europe.

The Middle East overall preferred to remain cautious about going all out against Russia. The Arab Gulf knows it must deal with Moscow as one of the world’s top three oil producers and work with Putin to ensure that oil prices which still determine the financial health of many Arab Gulf states and monarchies remain in control and stable. Russia’s role here leverages any all-out partnership with Iran, specifically in fields where Moscow could be seen openly abetting Tehran in regional conflicts. For now, the geopolitics of Putin’s visit is based on very short-term, symbolic goals via what analyst Esfandyar Batmanghelidj calls “a pageantry of state visits”.