Is AUKUS the New ASEAN in the Indo-Pacific?

Главная / Комментарии / Is AUKUS the New ASEAN in the Indo-Pacific? 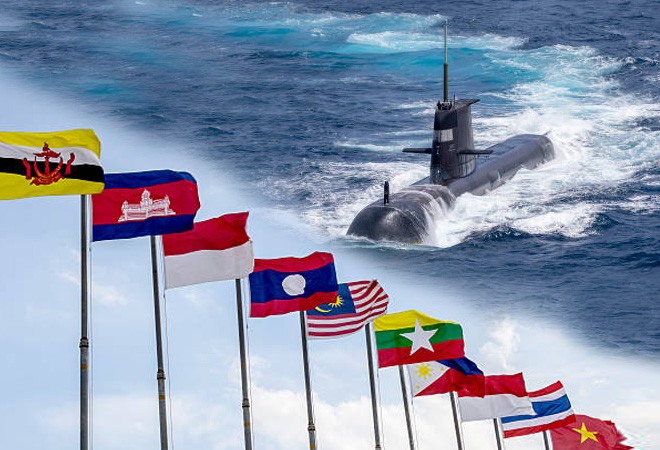 The US Secretary of State, Antony Blinken, recently said that the Indo-Pacific region will “shape this century”. It is no secret that the Indo-Pacific, in the last five years, has become the fastest-growing region, accounting for two-thirds of global economic growth, and is also an arena of security competition due to China’s growing belligerence. This new opportunity and threat are sounding alarm bells in ASEAN, a  cord that connects the Pacific coastline to the Indian Ocean. ASEAN, a grouping of 10 Southeast Asian nations aiming to integrate political, economic, and security issues in Asia-Pacific through consultation (musyawarah) and consensus (mufakat), has emerged as a regional stabilising force. After the end of the Cold War, ASEAN took upon itself the task of maintaining peace and stability in the region by acting as a central force in ensuring security in the region.

Once at the height of a golden age, ASEAN believed it was in the driver’s seat of the region’s fortune. However, the emergence of AUKUS has exposed the fissures in the idea of ASEAN centrality in the Indo-Pacific.

ASEAN today faces headwinds as the regional balance of power is undergoing a shift with the aggressive rise of China and the US’ relentless attempt to maintain the status quo with the formation of new regional groupings with its like-minded allies (QUAD, AUKUS, etc). The turbulence in ASEAN is symptomatic of the US–China rivalry and ASEAN’s internal weaknesses. In September 2021, when the trilateral security (military and technology) pact, i.e., AUKUS was announced, it evoked divided reactions from ASEAN member states. On one hand, Indonesia and Malaysia expressed deep concerns regarding the continuing arms race and power projections in the region; on the other hand, Singapore, Vietnam, the Philippines, etc. welcomed AUKUS, though cautiously. Once at the height of a golden age, ASEAN believed it was in the driver’s seat of the region’s fortune. However, the emergence of AUKUS has exposed the fissures in the idea of ASEAN centrality in the Indo-Pacific.

To unpack the notion of ASEAN centrality in the Indo-Pacific region, firstly one must comprehend the causes that motivated the formation and growth of ASEAN. For example, strong leaders (Lee Kuan Yew, Suharto, Mahathir, etc.), the threat of communism, economic advancement (ASEAN PTA, ASEAN FTA, etc.), the model of regional networks (ASEAN Regional Forum, ASEAN plus Six, East Asia Summit, etc.) acted as interdependent variables that engendered the ASEAN centrality, and it is engraved in the ASEAN Charter as one of its key purposes and principles. This article focuses on the two independent variables, i.e., the economic growth, and the grid of regional platforms, which were instrumental in making ASEAN central to the region’s geopolitics.

With a combined GDP of US $3.2 trillion in 2019, ASEAN in the last five decades has achieved impressive economic progress. ASEAN replaced the logic of war with the logic of economic development and growth. Today, ASEAN has become the fifth largest economy in the world and is projected to become fourth in 2030. In the last 50 years, ASEAN has achieved remarkable human and sustainable development progress, lifting millions of lives out of poverty and improving access to education and health.

ASEAN–China trade has grown at an unprecedented scale from US $9 billion in 1991 to US $685 billion in 2020. ASEAN became China’s largest trading partner in 2020 surpassing the EU.

Over the years, ASEAN has emerged as a space for economic competition between China–US, with China emerging as a clear winner. The US, until now, has lacked a coherent economic vision for the region. In 2020, ASEAN–US goods and service trade was around US $362 billion and in terms of foreign direct investments it was US $329 billion—a 3.2 percent increase over 2019. ASEAN–China trade has grown at an unprecedented scale from US $9 billion in 1991 to US $685 billion in 2020. ASEAN became China’s largest trading partner in 2020 surpassing the EU. The US is compensating for China’s economic prowess in the region with more robust defence and security ties with like-minded partners.

ASEAN has solidified its position by engaging with major powers through its dialogue platforms. ASEAN Regional Forum (ARF), ASEAN plus Six, East Asia Summit (EAS), etc. have helped it to stay out of power conflict and establish its central place in the region.

Since its establishment in 1994, ARF has become a platform for foreign ministers to discuss various political and security issues of common interest, enabling an environment of mutual trust and confidence. Similarly, since 2004, EAS has focused on areas like energy, finance, ASEAN Connectivity, etc.

ASEAN outlook for Indo-Pacific lacks teeth. ASEAN’s weakened position vis-à-vis the security concerns in Indo-Pacific has paved the way for the regional realignment by the US and its allies.

These forums for the first time provided an interactive inclusive platform to discuss matters ranging from economy to geopolitics to security, nonetheless, it has not been able to address the core regional security concerns like Chinese assertiveness in South China Sea, Myanmar’s coup etc. The institutions that were once the backbone of ASEAN centrality are facing strategic paralysis. The series of new partnerships in the Indo-Pacific is the manifestation of ASEAN’s incoherence with respect to the security challenges of the 21st century. Some ASEAN states are adopting strategies of bandwagoning with China, for e.g., Cambodia and Thailand, while some are just passing the buck to the US. ASEAN today struggles to take a unified collective stance. Also, ASEAN outlook for Indo-Pacific lacks teeth. ASEAN’s weakened position vis-à-vis the security concerns in Indo-Pacific has paved the way for the regional realignment by the US and its allies.

Will AUKUS overtake ASEAN in the Indo-Pacific?

The security relations in the Indo-Pacific range from US-based bilateral pacts to multilateral ASEAN-led cooperation. Over the years, both these approaches have complemented each other. However, as ASEAN weakens, the US-led alliances will become stronger. ASEAN has been wary of the Asia pivot strategy of the US.  AUKUS has the potential to disrupt the ASEAN centrality. For starters, AUKUS is a security deal that aims to provide Australia with nuclear submarine technologies. These submarines are stealthier, speedier, and go long distances, lending Australia offensive capabilities against China. AUKUS aims to promote deeper technology sharing to strengthen defense and security capabilities. AUKUS will get stronger with each passing day if ASEAN do not come out clear on the security concerns of US and its allies.

To re-establish its ASEAN centrality, ASEAN has to undergo internal and external restructuring to face the security challenges of the 21st century. ASEAN has to reinvent its multilateral institutions to deal with the changing security environment in the region. ASEAN has to focus on diversifying its economic integration and not continue to solely depend on China-led initiatives. To quote Amitav Acharya, “ASEAN should act as a hub, if not the leader, of regional multilateral forums for East Asia. Despite ASEAN’s limitations, no other organisation can challenge its role as the hub of regional multilateral diplomacy.” ASEAN should address hostility, mistrust, counter alliances, and security dilemma in the region. Deeper trust and engagement with ASEAN should become a necessity and not an option for AUKUS in the Indo-Pacific.